Perhaps you have run into a Messianic Jew or a member of the Christian Zionist movement and have wondered how their views stack up against Scripture in able to better converse with them.  The following is a helpful essay by Dr. Michael Horton, writing from a Reformed and covenantal perspective, on how Christians should consider Israel in relationship to the church in New Testament times.

The center of the entire prophetic forecast is the State of Israel,” declares prophetic pontiff, Hal Lindsey. On May 14, 1948, Israel became a nation again and, writes Lindsey, “For this reason I am convinced that we are now in the unique time so clearly and precisely forecast by the Hebrew prophets. Thus, all the various prophecies will come to pass during this generation.”

The Dispensationalists have maintained that the prophecies of Ezekiel and Daniel regarding a future restoration of Israel are fulfilled in the recreation of that state in 1948. What about this? Is that what the prophets had in mind? A further question must then be asked: Are the promises God made to Abraham fulfilled in the Zionist movement or in the Gospel of Jesus Christ? But first things first: 1948.

Ezekiel prophesies, “I will now bring Jacob back from captivity and will have compassion on all the people of Israel, and I will be zealous for my holy name” (39:25). Daniel’s prophecies are delivered in 530 BC, just fifty-five years after Ezekiel’s and also point to a future restoration of a now destroyed nation of Israel. During Ezekiel’s ministry, the nation is dismantled and carried off into Babylonian captivity and both prophets are offering the people hope in the midst of tragedy. One hundred years later, the promises made through these two prophets are fulfilled as Nehemiah and Ezra are allowed to return to rebuild Jerusalem with released exiles. The walls are rebuilt, God’s people return, and although they are an imperial satellite, Babylon’s rulers empty their own treasuries to assist in the rebuilding. This is all in line with the prediction that God will bring His people out of exile back to Jerusalem is finally fulfilled. A new temple is even built with the assistance of the Persian king.

All of this was fulfilled within a century of the prophecy. The temple was rebuilt, sacrifices were renewed, the city was rebuilt, and the exiles came home. So much for 1948.

Of course, there are predictions made, by Daniel, for instance, which require fulfillment beyond the return under Nehemiah. One example is the vision of the four kingdoms–Babylon and Medo-Persia (two empires which existed during Daniel’s own lifetime), and Greece (second century, BC) and Rome (first century, BC through first century AD). All of these world empires will collapse, two of which Daniel knew first-hand, while the latter two were fulfilled as late as the first century AD. These earthly empires would never outlast the empire of the coming One who will finally bring all of His scattered tribe (Jew and Gentile alike) home: “I will place over them one shepherd, my servant David, and he will tend them; he will tend them and be their shepherd” (Ez 34:23). It was just this prophecy which Jesus proclaimed Himself to be fulfilling in His self-designation as the Good Shepherd in John chapter ten. Thus, Ezekiel is not about Jewish Zionism in 1948, but about the return of the exiles in 440 BC and ultimately about Jesus Christ as the Son of David.

What about the destruction of the temple? Was it not predicted in the New Testament that there would be a final destruction of the temple and the city? Indeed, it was. “Jesus left the temple and was walking away when His disciples came up to Him to call His attention to its buildings. ‘Do you see all these things?’ He asked. ‘I tell you the truth, not one stone here will be left on another; every one will be thrown down.'” This is often taken to refer to a fulfillment in our own lifetime, and yet, when the disciples wanted to know what the signs of this would be, He said, “You will be handed over to be persecuted and put to death.” Doesn’t it sound like Jesus was preparing them for an immediate fulfillment? The fact is, this was fulfilled in AD 70, when the city was destroyed by the Romans, Jews and Christians were slaughtered and scattered, and the temple was destroyed to the extent that “not one stone” was “left on another.” The Roman emperor, proclaiming himself God, sat in the Holy of Holies, fulfilling the “abomination of desolation” predicted in Daniel. And if, after years of Dispensational teaching on the “abomination of desolation,” taking place during the tribulation, it is difficult to accept this interpretation, just look at our Lord’s own remark: “So when you see standing in the holy place ‘the abomination that causes desolation,’ spoken through the prophet Daniel–let the reader understand–then let those who are in Judea flee to the mountains.” Would the original audience not have clearly understood Jesus to be preparing them for events which were right around the corner? “So when you see standing in the holy place…”

Therefore, the prophecies of Daniel and Ezekiel do not have to find their fulfillment in 1948 or in any other period which coincides with remarkable current events.

The second question, however, is of more central concern: Is the modern state of Israel and Zionism in general the fulfillment of God’s promises to Abraham? Classical Dispensationalism presents to programs of salvation, though recent revisions have toned down on the radical discontinuity. In classical Dispensationalism, God’s ultimate program involves the nation Israel. The Church is a “parenthesis” (Chafer), a sort of footnote or sidetrack in contrast to God’s main mission to save ethnic, national Israel.

We believe that this position gravely misunderstands the plan of God and the clear teaching of the Scriptures. In so doing, it risks offering false hopes to modern Jews of a plan of redemption which, at least in temporal matters, does not require the mediation of the world’s only Savior. If you think this is a caricature of the position, just attend the annual National Prayer Breakfast in Honor of Israel in Washington, DC. I did that one year and I remember fundamentalist preachers and prophecy “experts” leading the Jewish-Christian gathering in prayer “to our common Father–the God of Abraham, Isaac, and Jacob.” Now, if another group of Christians down the street had a prayer service of Christians and Moslems or Christians and Hindus, it would be considered a basic denial of the uniqueness of Christ and His mediatorial work, but for these people, Jews evidently did not need the Gospel, for there was no reference to it even in passing. Not one prayer ended with the name of Christ.

The Apostle Paul would call this the Galatian heresy. “Understand that those who believe are children of Abraham. The Scripture predicted that God would justify the Gentiles by faith, and announced the gospel in advance to Abraham: ‘All nations will be blessed through you.’ So those who have faith are blessed along with Abraham, the man of faith. All who rely on observing the law are under a curse” (Gal 3:6-10). Thus, there are not two programs. Jews and Gentiles alike are “under a curse” and can only approach God and receive His promises by faith in Jesus Christ. To suggest that God is fulfilling promises to national Israel apart from Christ surely borders on heresy.

But God is not fulfilling promises to national Israel. The abomination that makes desolate in AD 70 did, in fact, make the temple desolate. While we rejoice with the persecuted Jews of the world in their homeland, there is no prophetic significance to the year 1948.

If we look very carefully at the promises made to Abraham (Gn 12:2-3), and the many warnings which follow throughout the Old Testament, the promise of the land is conditional upon Israel’s obedience. The promise of a final Promised Land and resting place, however, is by faith alone. Thus, the Old Testament patriarchs were not as interested in a plot of land as modern Dispensationalists. “By faith, Abraham made his home in the promised land like a stranger in a foreign country, for he was looking forward to the city with foundations, whose architect and builder is God. And so from this one man, and he as good as dead, came descendants as numerous as the stars of the sky. All these people were still living by faith when they died. They did not receive the things promised” (Heb 11:8-13). What? They didn’t receive the things promised? They were in the land, weren’t they? But the Bible says that this was not the ultimate promise. “They admitted they were strangers on earth [even in the promised land]. People who say such things who that they are looking for a country of their own.” But they had a country of their own! “If they had been thinking of the country they had left, they would have had opportunity to return. Instead, they were looking for a better country–a heavenly one” (Heb 11:14-16).

So, you see, the promises made to Abraham are fulfilled in Christ and passed along to all those who belong to Christ by faith. Whether Jew or Gentile, all who are relying on the works of the law are still under a curse and apart from the Messiah there is no promise of anything but judgment.

“I ask then: Did God reject His people? By no means!,” writes the Apostle Paul, citing his own conversion to Christ as a Jew. “So too, at this present time (not some future time) there is a remnant chosen by grace” (Rom 11:1,5). In this present age, God is grafting in with Israel branches from alien, Gentile trees and forming one single family in which “there is neither Jew nor Gentile….For all are one in Christ” (Gal 3:28).

If you are interested in reading further on confessional Reformed covenant theology, the following book by Revs. Zach Keele and Mike Brown is a very helpful introduction.  I have a number of copies for purchase.

For something more focused on end times theology from a Reformed and covenantal perspective, this book by Rev. Kim Riddlebarger is helpful as well. 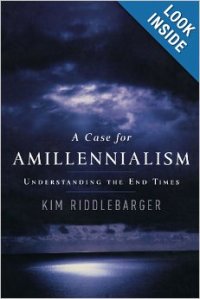