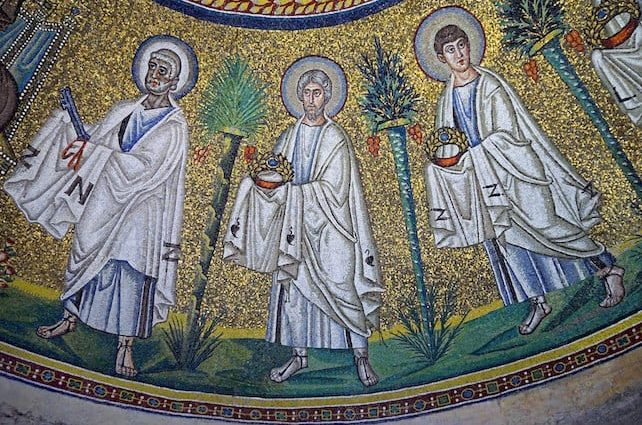 Space does not permit an elaborate historical treatment of the question of Christ’s presence in the Lord’s Supper. Suffice to say, the ancient church exhibited a variety of views on the relationship between the signs of bread and wine and the thing they signified (Christ crucified and all his benefits). Notably, St. Augustine in the fourth century believed that the efficient cause of grace in the Eucharist is God and not the elements, and that the reality signified is only received by faith (Horton 2011:764; Inst. 4.17.34). However, these distinctions would be lost over time during the medieval period because of the rise of Neoplatonism and the idea that grace is a habit infused into the faithful to raise the soul to a supernatural level. Beginning with the Fourth Lateran Council (1215), this Roman Catholic conception evolved over time. Applying Aristotelian logic, Thomas Aquinas refined what has become known as “transubstantiation” as adopted in the sixteenth century Council of Trent (Session 13). Despite the (accidental) appearance of bread and wine, they are actually (essentially) Christ’s body and blood. In the consecration of the elements, the laws of nature are suspended and the bread and wine are converted (changed in substance): Christ is actually and locally sacrificed, and his physical organs eaten. Grace is supposedly imparted in the Supper as a physical substance to make people inherently (ontologically) holy (Horton 2011:764-765, 804; cf. Heidelberg Catechism Q/A 80).

In reaction to, among other doctrines, the “vulgar” weight and proximity of Christ’s presence in the Supper in Roman Catholicism, arose a reactionary movement in late medieval spirituality called Anabaptism. While diverse in nature, this movement – with its mystical and gnostic tendencies – treated the Supper as essentially an occasion for remembering. Hence, Christ was not present in the moment of administration (Horton 2011:765-766).

The sixteenth century Protestant Reformation, however, introduced a view on the sacraments in general and the Supper in particular that different significantly from medieval Rome and Anabaptism. Though, here too, the Reformation movement was not uniform.

For starters, Martin Luther emphatically rejected the medieval Roman Catholic doctrine of transubstantiation, as well as the notion that Christ is sacrificed on the altar. However, he still argued that Christ is mysteriously present according to his human nature “in”, “with” and “under” the elements: a “coupling” of the sign and signified. According to Luther, this is possible by virtue (of the hypostatic union) of the divine attributes being communicated to the human, thereby making the “whole” Christ present in many places at one time (ubiquity). This doctrine is known as “consubstantiation”. In this scheme, Christ is received not simply by faith, but through the mouth. But this oral reception is not strictly physical. Lutherans conceive of a sacramental three-fold eating: oral, by faith and sacramentally. Lutherans have, like the Reformed, wanted to avoid the Nestorian separation of the two natures of Christ. The believer receives the whole Christ. But Luther and his disciples sought to affirm so much by arguing that Christ’s human nature is somehow omnipresent in the Supper. John Calvin, however, would later beg to differ at this critical point, having argued that the whole Christ is present according to the sacramental workings of the Holy Spirit (Horton 2011:808-810).

One of the important ways in which the real presence of Christ debate advanced was through the debate between Luther and Swiss Reformer Ulrich Zwingli. Zwingli followed Augustine in asserting that Christ is omnipresent in the Supper only according to his divinity and power (which is necessary to salvation). Furthermore, the Supper is primarily the believer’s act of remembering, testifying and recommitment. Luther critiqued Zwingli for his spirit-matter dualism (subtle Nestorianizing Christology) in effectively dismissing the importance of Christ’s human nature in the Eucharist; as well as his accent upon creaturely action (Horton 2011:808-810).

Another Swiss reformer, John Calvin, signed the Luther-endorsed 1536 Wittenberg Concord that affirmed the union of the signs with whole the Christ (thing signified) received in Supper. With additional insights from Peter Martyr Vermigli, Calvin essentially developed a theology of Christ’s presence int the Supper found in our Reformed confessions (Three Forms of Unity). While agreeing with Zwingli that Christ’s ubiquity (omnipresence) according to the flesh is an error, he nevertheless followed Luther and Vermigli in applying Chalcedonian Christology (distinction without separation) in arriving at his doctrine of the Supper. For Calvin, the question of “Where is Christ?” after the ascension is solved by having a robust pneumatology (teaching on the Holy Spirit). While Christ remains locally embodied in heaven, he is nevertheless present as the God-man (in his Person and saving work) in saving action through the signs of bread and wine by the agency of the Spirit in the Supper. The Supper is first and foremost God’s ratification of his covenant promise, where God’s promise is united to Christ’s person. The gift of the Supper is to assure the believer of God’s promise, which is to confirm faith in Christ. The “mechanism” of receptive eating is faith and the “mode” is spiritual. Christ and all his benefits are truly communicated to the believer (Horton 2011:810-813).

Part of the mysterious workings of the Spirit in the Supper is making the substance of Christ’s flesh present when he remains bodily in heaven. This spiritual presence and spiritual feeding is more than subjective recollection or imagination – as if the Spirit replaces Christ in the moment of dining. It is an actual participation in the body and blood of Christ. The “gap” to be overcome is not “spacial”, but rather “ethical” and “eschatological”. Both the Son’s divinity and the Spirit bring the believer into renewed covenant relation with the whole risen Lord Jesus. In so doing, this age and the age to come wondrously overlap. The Spirit descends to raise the believer “upward” to feed upon the risen Christ (Horton 2011:814).

The frequency of celebration

The practice of the post-apostolic church fathers indicates unequivocally that the Supper was observed on a weekly basis. The earliest writing (AD 90-120) from after the NT period to this effect comes from the Didache or The Teachings of the Twelve Apostles (cf. Chap. XIV). Other clear and overwhelming evidence from the early church includes Ignatius of Antioch (108-140) in his Epistle to the Ephesians (Chap. XX); Justin Martyr (110-65) in his First Apology of Justin (Chap. LXVII); and Irenaeus in his Against Heresies (4.18.6).

The medieval Roman Catholic Church, dating from around the late fifth century onwards, would continue this pattern. In fact, the celebration of the Eucharist would become even more frequent than weekly because of the church’s theology of justification and the sacraments. The celebration of what would become known as the Mass was seen as an integral part of a system of works righteousness. Receiving the Supper gained one merit before God. The Supper itself constituted a re-sacrifice of Christ where the risen Lord Jesus was somehow physically present on the altar: dispensing grace like medicine to the faithful.

The sixteenth century Protestant Reformation was not only a recovery of the central article of justification by faith alone, but also a retrieval of the apostolic theology and practice of the Lord’s Supper. Calvin is perhaps most famous within the early Reformed tradition in this regard. However, his desire to see the Supper celebrated on a weekly basis was prevented by a meddling civil magistrate.