Is Christ’s command in Matthew 5:38-42 to forsake retaliation normative for Christians in all spheres of life?  If so, then what does one do with the New Testament affirmation of the God-ordained legitimacy of civil government that bears the sword?  How, then, does a Christian know when to turn the cheek or not, if ever?  In this sermon (audio) on Matthew 5:33-48 (Part II) I argue that the answer to these questions lies in the doctrine of God’s two kingdoms that emerges out of the biblical narrative.  As Christians, we are citizens of the redemptive kingdom, which is made manifest in this age in the church, as well as citizens of the common kingdom, which comprises all other institutions in this world, like family, commerce and civil government.  These two kingdoms correspond to the covenant of grace (Genesis 12-15) and the Noahic Covenant (Genesis 8:22-9:17) respectively, and are both mediated by the incarnate Son of God.  Nevertheless, Christ rules over his two kingdoms with different purposes and ends in view.  The church is the only community in the world proclaiming and living out the good news of unconditional forgiveness, reconciliation and restoration.  In this kingdom and when persecuted for allegiance to it, Christians are to turn the other cheek.  The common kingdom, however, is governed by the distinctly different principle of proportionate justice administered by the state.  In this kingdom, the Christian must expect punishment for wrongdoing, can act in self-defense and may seek appropriate civil and legal redress when a victim of crime.

God’s two kingdoms correspond to the Pauline doctrine of the two ages that Christians inhabit.  Ultimately, the civil kingdom of this present evil age with pass away along with its threat of punishment.  On the other hand, the kingdom of heaven made manifest in the church on earth will give way to the new heavens and new earth on that Final Day.  We as Christians can only lay claim to the kingdom of heaven by faith in Jesus Christ who absorbed God’s retributive wrath (slap on the other cheek) on our behalf for our sins ( slapping God). 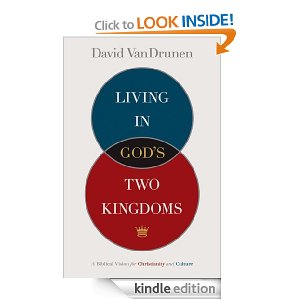 If you would like to read more about the doctrine of two kingdoms, David VanDrunen’s, Living in God’s Two Kingdoms, is a fine introduction.  I believe you can read the introduction and Chapter 1 online at Amazon.

Also, if you are interested in getting a sense of the historic precedent for both the doctrines of two kingdoms and natural law in the catholic and Reformed traditions, you can see VanDrunen’s more scholarly historical work, Natural Law and the Two Kingdoms: The Development of Reformed Social Thought. 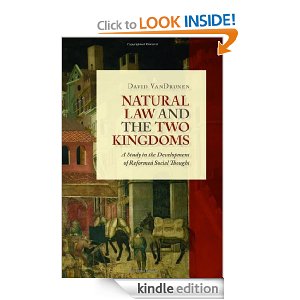 Finally, we have the privilege of having David VanDrunen with us in August of this year.  He will be speaking at various theological institutions and universities in South Africa as well as preaching and doing a mini-conference at RCSS.  VanDrunen will be looking to promote his forthcoming book, Divine Covenants and Moral Order: A Biblical Theology of Natural Law (Eerdmans: April 2014).  Stay tuned for more details…

This site uses Akismet to reduce spam. Learn how your comment data is processed.