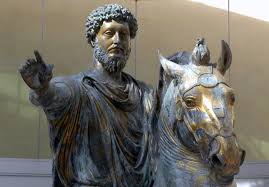 Recently, I read Marcus Aurelius’s Meditations for the first time—a bracing read in a weighty and contentious season. Likely written around the 170s, the material later published as Meditations probably wasn’t meant for public consumption. Marcus Aurelius (Roman Emperor from 161–180 AD) kept the journal, a collection of short mental exercises, while leading his armies on the Roman frontiers. The “meditations” are meant to help Marcus live and die well, according to the Stoic view of a good life (one lived in harmony with reason, marked by vigilant moderation of emotion). Many are suitable for an anxious age:

“How much time and effort a man saves by paying no attention to what his neighbour says or does or thinks, and by concentrating on his own behavior to make it holy and just!”

“Remember how long you have procrastinated, and how consistently you have failed to put to good use your suspended sentence from the gods […] Your days are numbered. Use them to throw open the windows of your soul to the sun.”

“You always own the option of having no opinion. There is never any need to get worked up or to trouble your soul about things you can’t control.”

But the Meditations ultimately fall short for a Christian reader, and this is especially true when Marcus takes up the subject of suffering. For example:

[Harm only consists in] your capacity to see it. Stop doing that and everything will be fine. Let the part of you that makes that judgment keep quiet even if the body it’s attached to is stabbed or burnt, or stinking with pus, or consumed by cancer. Or to put it another way: It needs to realise that what happens to everyone—bad and good alike—is neither good nor bad.

Basically, if the human mind is doing its job, then there’s no need for tears in the face of suffering. Just control your reaction, and for all intents and purposes, the pain ceases to be real.

This take reminded me of another little “handbook for life” that takes Stoics like Marcus to task.

What’s come down to us as A Little Book on the Christian Life was first included in the second edition of Calvin’s Institutes on the Christian Religion, which was published in 1539. This section, “On the life of a Christian man”, was separately translated into French and circulated by a Parisian Huguenot named Pierre de la Place in 1540. Almost a decade later, English Reformer Thomas Broke published a version, itself more than a decade before the full Institutes appeared in English.

The work, more recently titled the Golden Booklet, enjoyed renewed popularity in Dutch and English translations between the mid-nineteenth century and the modern day. Unlike Marcus’s Meditations, of course, it was meant to be widely read. And though a quick read might pick up on some surface similarities in subject and tone, it actually offers a markedly different approach to the topic of suffering. Read the full article by Sarah White.