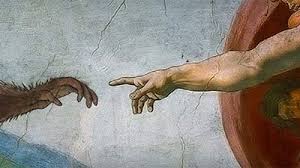 Theistic evolution and the creation of ‘human beings’

Back in late 2009, some ministerial colleagues and I were discussing with concern the apparently growing influence of evolutionary thinking in the Canadian Reformed Churches.  What could we do about it?  Five of us decided to collaborate on an article, “Ten Reasons Why Evolution is Dangerous and Evil.”  Authored by Walter Geurts, George van Popta, John van Popta, Jim Witteveen and yours truly, this was published in the January 1, 2010 issue of Clarion.  You can find it online here.

At the beginning of March 2010, an 11-part series of responses began to be published on the Reformed Academic blog.  It’s not my intent to interact with those responses as such.  Rather, I want to point out one particular point of response.  It relates to something I’ve read more recently.

One of the “ten reasons” was that “Evolution must regard Genesis 2:8 as mythical.”  Rev. John van Popta argued that the creation of Adam was a special act of God.  Adam was created from literal dust as the first human being.  Genesis 2:8 gives us history, not myth or allegory. Read the full article by Wes Bredenhof.