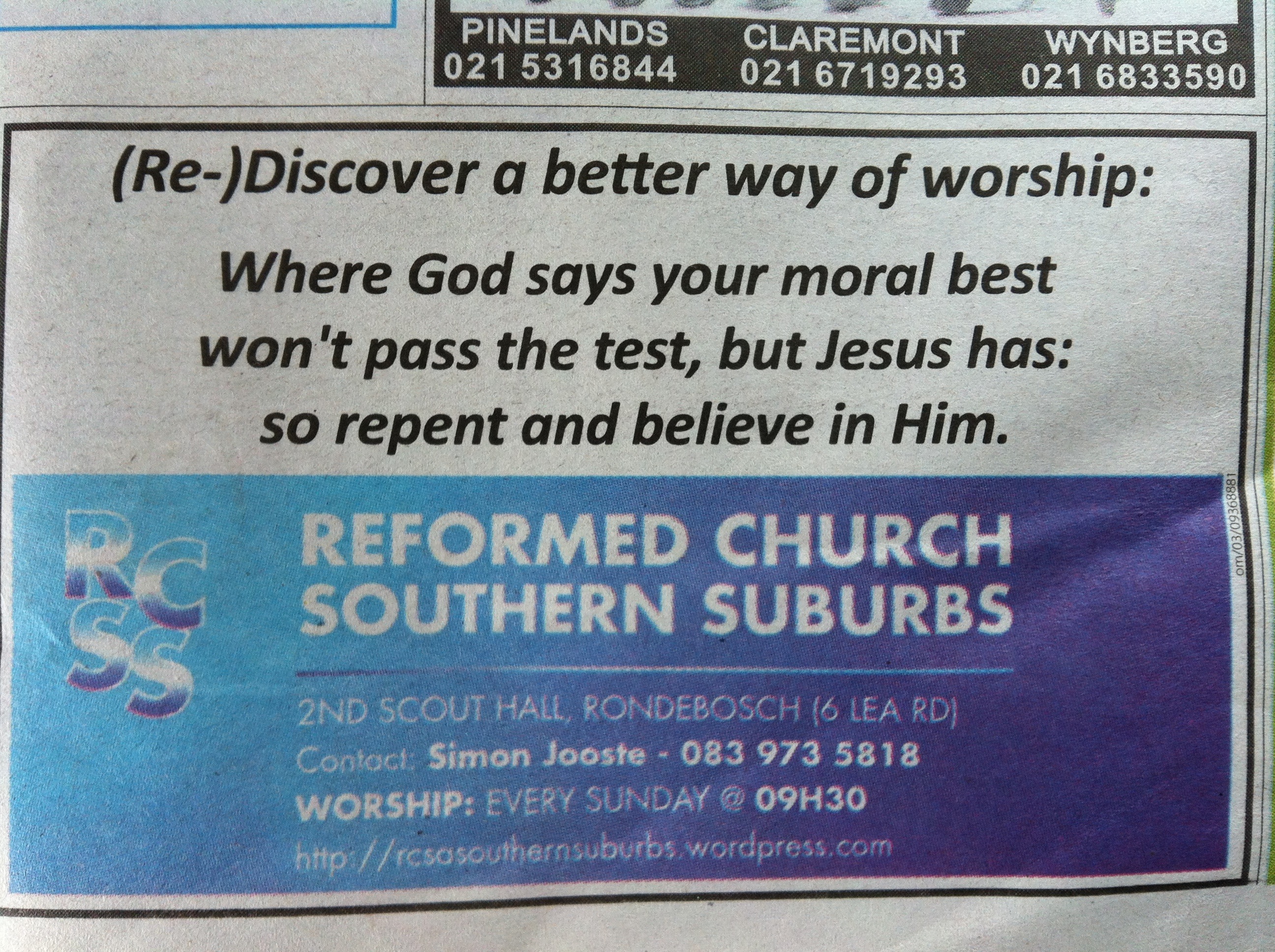 One of the distinguishing marks of the Reformed tradition is its insistence that God’s law (commands) be carefully distinguished from his gospel (promise).  The fundamental reason why there was a Protestant Reformation in the first place is because the Medieval Roman Catholic Church had confused or conflated the gospel with the law when it comes to the sinner’s justification before God.  The collapsing of the gospel into the law has remained the perennial danger of the Protestant church in its many traditional and denominational expressions.  Hence, one of the famous solas coming out of the Reformation: semper reformanda – the church is always reformed according to the Word of God – remains as applicable as ever…
Rev. Michael Horton points out in an online essay called The Law & The Gospel that the Roman Church at the time of the Reformation undermined the sufficiency of Scripture not by denying its divine inspiration but by adding to it and “by failing to read and proclaim Scripture according to its most obvious sense.”   The Reformers sought to address this crucial problem.  Horton observes:

At the heart of the reformation’s hermeneutics was the distinction between “Law” and “Gospel.” For the Reformers, this was not equivalent to “Old Testament” and “New Testament;” rather, it meant, in the words of Theodore Beza, “We divide this Word into two principal parts or kinds: the one is called the ‘Law,’ the other the ‘Gospel.’ For all the rest can be gathered under the one or other of these two headings.” The Law “is written by nature in our hearts,” while “What we call the Gospel (Good News) is a doctrine which is not at all in us by nature, but which is revealed from Heaven (Mt. 16:17; John 1:13).” The Law leads us to Christ in the Gospel by condemning us and causing us to despair of our own “righteousness.” “Ignorance of this distinction between Law and Gospel,” Beza wrote, “is one of the principal sources of the abuses which corrupted and still corrupt Christianity.”1

Like Luther and Calvin before him, Horton insists that the church must make it crystal clear that while the law is indeed a guide to Christians for expressing their grateful obedience to God for his salvation, it is not, however, the grounds or basis for the sinner’s redemption.

Without this constant emphasis in preaching, one can never truly worship or serve God in liberty, for his gaze will always be fastened on himself–either in despair or self-righteousness–rather than on Christ. Law and Gospel must both ever be preached, both for conviction and instruction, but the conscience will never rest, Calvin says, so long as Gospel is mixed with Law. “Consequently, this Gospel does not impose any commands, but rather reveals God’s goodness, his mercy and his benefits.”6 This distinction, Calvin says with Luther and the other Reformers, marks the difference between Christianity and paganism: “All who deny this turn the whole of the Gospel upside down; they utterly bury Christ, and destroy all true worship of God.”7

How is the the church fairing today?  Horton gives his two cents on the North American context.  How applicable is it to contemporary (South) Africa?

In our day, these categories are once again confused in even the most conservative churches. Even where the categories of psychology, marketing and politics do not replace those of Law and Gospel, much of evangelical preaching today softens the Law and confuses the Gospel with exhortations, often leaving people with the impression that God does not expect the perfect righteousness prescribed in the Law, but a generally good heart and attitude and avoidance of major sins. A gentle moralism prevails in much of evangelical preaching today and one rarely hears the Law preached as God’s condemnation and wrath, but as helpful suggestions for a more fulfilled life. In the place of God’s Law, helpful tips for practical living are often offered. (In one large conservative church in which I preached recently, the sermon was identified in the program as “Lifestyle Perspectives.” Only occasionally was one reminded that it was a church service and not a Rotary meeting.) The piety and faith of the biblical characters are often preached as examples to imitate, along with Thomas Jefferson and Ben Franklin. As in Protestant liberalism, such preaching often fails to hold Christ forth as the divine savior of sinners, but instead as the coach whose play-book will show us how to achieve victory.

Horton ends his essay with some further remarks on the dangers of softening the law to make it “doable” and hardening the gospel into a “new law.”

When the Law is softened into gentle promises and the Gospel is hardened into conditions and exhortations, the believer often finds himself in a deplorable state. For those who know their own hearts, preaching that tries to tone down the Law by assuring them that God looks on the heart comes as bad news, not good news: “The heart is deceitful above all things…” (Jer. 17:9). Many Christians have experienced the confusion of Law and Gospel in their diet, where the Gospel was free and unconditional when they became believers, but is now pushed into the background to make room for an almost exclusive emphasis on exhortations. Again, it is not that exhortations do not have their place, but they must never be confused with the Gospel and that Gospel of divine forgiveness is as important for sinful believers to hear as it is for unbelievers. Nor can we assume that believers ever progress beyond the stage where they need to hear the Gospel, as if the Good News ended at conversion. For, as Calvin said, “We are all partly unbelievers throughout our lives.” We must constantly hear God’s promise in order to counter the doubts and fears that are natural to us.
But there are many, especially in our narcissistic age, whose ignorance of the Law leads them into a carnal security. Thus, people often conclude that they are “safe and secure from all alarm” because they walked an aisle, prayed a prayer, or signed a card, even though they have never had to give up their own fig leaves in order to be clothed with the righteousness of the Lamb of God. Or perhaps, although they have not perfectly loved God and neighbor, they conclude that they are at least “yielded,” “surrendered,” or “letting the Spirit have his way”; that they are “living in victory over all known sin” and enjoying the “higher life.” Deluding themselves and others, they need to be stripped of their fig leaves in order to be clothed with the skins of the Lamb of God. Thus, Machen writes,A new and more powerful proclamation of law is perhaps the most pressing need of the hour; men would have little difficulty with the gospel if they had only learned the lesson of the law. As it is, they are turning aside from the Christian pathway; they are turning to the village of Morality, and to the house of Mr. Legality, who is reported to be very skillful in relieving men of their burdens… ‘Making Christ Master’ in the life, putting into practice ‘the principles of Christ’ by one’s own efforts–these are merely new ways of earning salvation by one’s obedience to God’s commands. And they are undertaken because of a lax view of what those commands are. So it always is: a low view of law always brings legalism in religion; a high view of law makes a man a seeker after grace.13
We must, therefore, recover Law and Gospel, and with such preaching, the Christocentric message of Scripture, or no good will come of our work, regardless of how committed we are to inerrancy. We cannot say that we are preaching the Word of God unless we are distinctly and clearly proclaiming both God’s judgment and his justification as the regular diet in our congregations. To recover Scripture’s sufficiency we must therefore, like the Reformers, recover the distinctions between Law and Gospel.

Again, Horton’s entire essay can be read here.
Are you getting a steady diet of law and gospel rightly divided and related?  Or is your conscience being tormented by a “glawspel”?